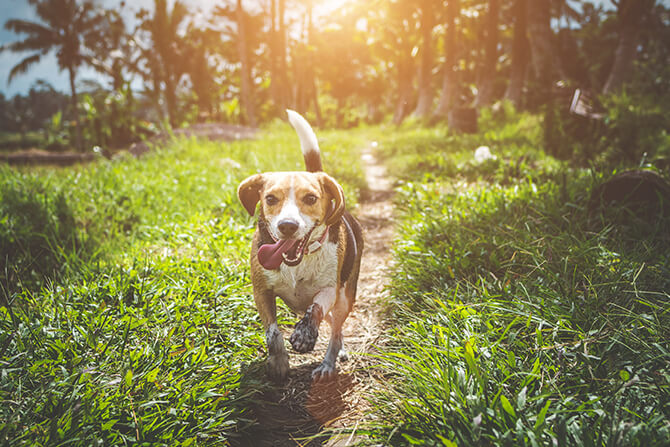 Aggression in dogs is expressed in a variety of behaviors, from barking and biting to chewing and lunging. Aggression is a natural behavior of pack animals, and is used to develop both the hierarchy and pecking order of the pack, as well as to provide self-defense it time of danger. Naturally, of course, as dog owners we want to stop dog aggression and prevent it from getting out of control. In order to do this, we must distinguish between the various levels of aggressive dog behavior and understand how to deal with each.

Low level aggressive behaviors are usually used first in all but very threatening situations. This is often seen when watching dogs interact for the first time. The dogs assume a stiff stance, keeping their heads and tails up and their ears pointed. They attempt to make themselves look as big as possible by raising their hackles and standing as tall as they can. Usually one dog will back down, and further levels of aggression are not needed. A spayed female will usually back down first, followed by a neutered male, then an intact female, and last to back down will be an intact male. The size of the dog is often irrelevant in this hierarchy, unless the level of aggression escalates.

With humans this aggression is seen with dog jumping, pushing the human, or growling. With smaller dogs and puppies this behavior is often seen as cute, but it can become serious and even dangerous, and it is important to curb this aggression as soon as it becomes evident.

If the dog does not see itself as being dominant by using the low level behaviors, it will escalate to higher levels of aggression including:

The higher level aggressive behaviors have gone beyond warnings to actual physical contact and biting or attempting to bite. These are serious situations, and the dog should be immediately isolated until it can be retrained.

Aggression is a normal behavior for dogs, and it is important for owner to be able to control the dog's aggression. Through early socialization and a firm understanding of the dog-owner relationship the animal will not show aggression. If aggression does become a problem it is important to deal with the issue immediately. Re-training using positive methods works much better than punishment, but often professional assistance is needed.

Neutering a dog will control the hormonal causes of aggression, but not all aggression is hormonally caused. Spaying and neutering dogs does not guarantee that they will be docile, and breeds that are bred as watch dogs or herding animals will need specific training on being non-aggressive. Some dogs are not good with other animals or dogs, just like some breeds are less tolerant of children. It is important to understand the natural aggressive tendencies of the breed of dog that you are considering obtaining to make sure you get a good match for you and your family.

Any dog can and will show aggression given the right set of circumstances. Aggression for dogs is a natural response and it is critical to know and understand what circumstances and experience are likely to provoke aggression in your dog. It is important to remember that what a human may see as an unprovoked aggressive act in a dog may, in fact, be perfectly logical to a canine mind. The major causes or reasons for aggression in dogs are discussed below.

Dogs will use this form of aggression when defending their perceived territory. This is any area that the dog is familiar with or has marked with his or her scent. While you, as the owner, may encourage your dog to protect your property, the dog may view the whole neighborhood or block as his territory to protect.

Dogs tend to guard members of their "pack" or family. This may include people, other family pets, or even favorite toys or food items. This is the aggression directed at unfamiliar people or animals that are approaching the dog's people, possessions or food. Sometimes the dog will even guard food or toys from familiar people or dogs.

This often happens when a dog becomes upset or over-excited and instead of becoming aggressive with the specific item, it seems to randomly attack another dog or person. For example a child may poke a dog through a fence, since the dog cannot defend itself through the fence it may turn its aggression on another dog in the yard or on another person.

Dogs are a pack animal, and they need to establish the pecking order or hierarchy with the family or pack. Once the dog has established his rank in the family he, or she, does not like to be challenged. Dogs may see themselves as higher in the ranking than the humans in the family, and that can lead to difficulties in controlling the dog.

Aggression due to fear

Dogs respond, like humans, with a fight or flight reaction when presented with a fear causing situation. Dogs that respond with aggression will growl, snarl or even bite if they become afraid. Remember, different reactions in dogs are due to past experience, genetic disposition, and training methods used. The dog may see a fearful event in a calm environment if he or she has been mistreated in the past. Dogs that would like to use the "flight" option but are trapped or cornered will resort to aggression to attempt to protect themselves.

Dogs will use aggression when they feel that they are threatened, that their position in the pack or family is threatened, or that their territory or possessions are threatened. While we humans often don't understand all the triggers of dog aggression, whatever the reason is, we need to be control aggressive dog behavior so that it doesn't become a dangerous situation for both humans and other animals. Positive rewards training works well for these dogs, and punishment will rarely help and in fact will often make the aggressive behavior worse.