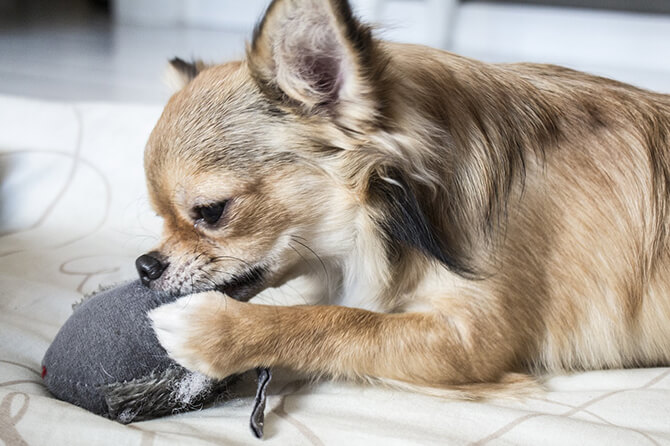 The best way to learn how to prevent your puppy from chewing is to look at someone who solved the same problem! Let's see how David and Sally were able to stop their puppy chewing:

Sunshine was a female standard poodle puppy that David and Sally acquired at the age of about 5 months old, right in the middle of a puppy's natural teething period. Normally, she was a very good little pup, but all of a sudden, she got bored with everything and became very destructive. If left in the house alone (even though she has the other dogs for companionship), she would counter/desk surf and destroys things!.

She figured out how to open doors when she was about 7 months old, but only (apparently) to jump on the bed and sleep. David and Sally figured it was her way to get away from the other dogs, but after her chewing 3 pairs of dress shoes, they had to lock their doors! This didn't stop Sunshine, however. She became a chronicle chewer and the Kanes needed a solution, fast. What were they to do?

To solve this puppy chewing problem, we need to "nip it in the bud," so to speak. It sounds like Sunshine is doing a lot of his chewing when David and Sally are away, so most likely the problem came from a lack of mental and social engagement. It is a great idea to try and alleviate any boredom by supplying your puppy with plenty of their own chew toys to keep them busy with during the day. Further to this, you should have regular times where your dogs get walked everyday. I recommend two walks per day of approximately 15 - 20 minutes each (depending on the time you can actually spare to take them). If you take them once in the morning, this should help keep them quiet.

Then, when you get home and you find that they have only chewed their toys and not caused any other destruction, then take your puppy for another walk as a reward. If you stick to this schedule for several weeks, they will soon associate behaving well during the day with getting a walk.

If your puppy has chewed things in your backyard that it wasn't supposed to, it is important to ignore the puppy when you get home. Do NOT tell the puppy off for the chewing (as they won't understand why they're being told off unless they get caught in the act) and quickly and quietly tidy any mess. There are plenty of chew toys available from pet stores and it is a matter of finding something that your pup is more interested in that is also durable.

Actual food chew toys such as pigs ears and bones are good; however, I would steer clear of these if you believe your puppy can become aggressive or possessive. A product called a Kong is good in that you can place food in the middle of it, which dogs then have fun trying to lick and eat out. Do some shopping around and ask your pet store for more good 'boredom buster' ideas.

Other ideas to prevent chewing when you're not at home include restricting the areas they can move outside. The kennel idea is one option, or you could fence an area off with a small temporary fence. Another idea is to have your puppy on a 'run' that leads through your backyard without allowing it access to anything you don't want chewed and then to their kennels. These can be annoying to both set up and then to have in your backyard, so they may not be an option for you.

If one object in particular seems to be getting chewed time and time again, you have the option of using an aversive substance (bitter apple, tabasco sauce, etc.) on that object such that the next time either dog chews it, it tastes revolting! This involves smearing something like Tabasco sauce or cayenne pepper over the object. This is a good idea if your puppy keeps aiming for one object; however if it just likes chewing in general, then he will leave that alone and go for the next closest chewable thing.

how to stop a dog from chewing