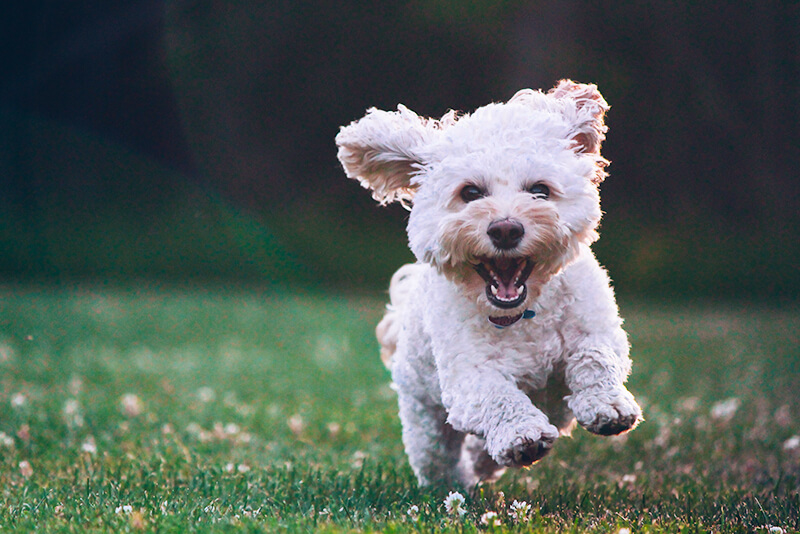 How dogs behave is primarily dependent on two things: the attention and training they receive as puppies,and their genetic history (the temperament of parents, the traits emphasized by the breeder, etc). There's not much we can do about the genetics; but, if we get our dogs while they are still young, we can influence them during their most teachable months. If they are subjected to gentle, effective training during this time, even the most stubborn genetic traits can be gradually overcome.

Puppyhood is the stage at which your dog learns how to react to new situations. Lessons learned during this period will be hard to unlearn. During puppyhood, a dog is very aware of his relatively helpless status in the house, and isn't likely to test the boundaries too much while still pre-adolescent. In a very young puppy (8 weeks to approximately 4 months) the worst behavior you are likely to get in terms of aggression will be mouthing while playing - the puppy will grip you with his teeth, which is how puppies play with each other. If your puppy bites too hard while playing, this is a cause for slight concern; evidently he doesn't have any concept of bite-inhibition yet. Perhaps he was taken from his mother too young (anything earlier than 8 weeks and the pup misses out on crucial lessons in communication and on what consitutes acceptable behavior). You will take over the role of mother: when he bites too hard, react by screaming loudly and shrilly (if you're in genuine pain, this shouldn't be too hard) and quickly turn away from the pup. Ignore all further overtures to play - pups won't play with a sibling that bites too hard, which is the first and most important lesson in bite inhibition.

The best form of aggression treatment in a puppy is prevention. Any puppy is hard work and constitutes a serious commitment on your part - it may be several years before it has matured into a fully-grown dog capable of independently carrying out the behavior you require of it. Until that time, you will need to spend time daily with your pup, training, playing, and rewarding it for good behavior.

The most effective manner of training puppies is, fortunately, also the most humane. It isn't necessary to actively punish your puppy for poor behavior: the trick is to use your brain and emphasize rewards when the puppy acts how you want. For example, say you come across your puppy chewing a shoe. You make a grab for it, the puppy runs away with the shoe, and you chase the puppy. This is reinforcing negative behavior: the puppy has just found a wonderful new game (which involves wanton destruction of your possessions). Instead of reacting like this, the smart thing to do is to turn and run slowly away. The puppy will follow you - the natural instinct of all dogs is to chase movement. When it catches up to you, gently remove the shoe from its mouth while saying, Drop it, and substitute straight away with a more appropriate toy. As soon as the pup's teeth close around the new toy, shower him with praise. Your puppy has just learned that it pays to do what you want.

Training Can Be Fun

Training is fun, both for you and your puppy - don't think of it as a chore. You're helping to sculpt the future dog, while strengthening the developing bond between the two of you. Spend five or ten minutes a day every day training your pup in the basic commands - 'come' and 'stay' for example. Don't prolong training periods beyond this time limit, and try to end on a good note. When training's over, it's time for a play session - you want your puppy to associate obedience with fun! Train frequently, for small lengths of time, and utilize food treats and lots of praise when he does as commanded.

When your puppy has had his shots, its time for his first foray into the outside world. These trips should be short and pleasant - its very important not to exhaust or overwhelm your puppy when venturing out, or he will learn to associate new situations with unpleasantness. Too much at once may make him timid and fearful in the long run. Take him for a fifteen minute walk, and then its time for home and a nap - your puppy will be more tired than you would believe possible.

Most dogs have a strong instinct to guard their food. If you're able to teach your puppy from an early age that the approach of humans while he's eating signifies positive things for him, you'll save yourself a lot of trouble in the long run. What might happen if you come across your adult dog one day, eating something toxic - and he won't let you near to take it off him? Badly trained dogs sometimes attack people or children who approach unexpectedly when the dog's eating. It's important not to allow this behavior to develop. The best way to go about doing this is to conceal a small treat in one hand as you approach the food bowl during meal-time. Command him to sit. (If he doesnt know this command yet, gently push his head out of the bowl and push on his hindquarters until he sits, while repeating the command.) When he does so, take the food away for a few moments; hand over the treat as you do this and praise him lavishly. Return the food after a few moments and allow him to finish. You should repeat this procedure at least once or twice a week, but never more than once during a meal as he'll just get irritated (which will undermine the whole point of the procedure!).

Your Puppy is Pliable

Puppies are almost never deliberately aggressive - the capacity for aggression doesn't exist in young creatures not yet capable of defending themselves. As the owner, you are now the defining influence in your puppy's life: what you say, goes. Your puppy may misbehave from time to time, but if you keep your calm, remember your training methods, and act like the boss, your pup will quickly learn what's acceptable and what's not.

The most important thing you can do is to remain consistent. Don't send mixed messages: 'No' means 'No', not 'Whatever'.