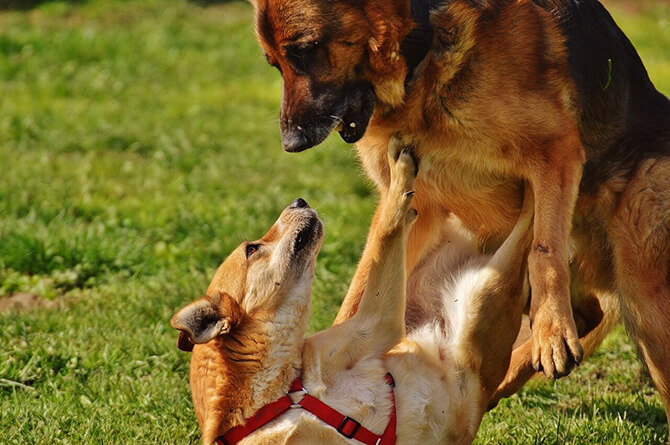 How To Stop Dog On Dog Aggression Before It Starts

It can be quite amusing watching two dogs wrestle each other in good-natured fun. But when one dog gets vicious with another dog, watch out! Not only is your dog a threat to other canines and to itself, but it's also a threat to YOU.

Sure, fighting is a natural instinct in canines that comes from their days in the wild. But unlike digging and jumping, two relatively harmless instinctive behaviors that you can accommodate more than stop altogether, fighting between dogs is one pack behavior you DON'T want to see taken to the next level.

So what's the solution? With the following tips you'll learn to stop dog on dog aggression before it becomes an issue.

Change Your Dog's Perception of Fighting with Other Dogs

Here's a winning idea: find a treat your dog REALLY likes, more than any other treats, and offer it to him as a reward for not attacking (or being provoked) by other dogs. Then, whenever the dog is in the presence of strange dogs, he gets this super special treat. Every time he looks at another dog, give him a treat (no clicks at this time because you are not shaping a behavior yet). Every time another dog passes by, give him a treat. At this point his behavior is not important. You give him the treat REGARDLESS of what he is doing. You are simply trying to make him associate seeing strange dogs and receiving these fantastic treats.

Why does this work? Because dogs learn through association. What you are trying to do is to change the dogs 'perception' of the strange dogs. Instead of getting upset at the approach/presence of other dogs, the dog learns to anticipate good things. You want the dog to learn that, "When other dogs are around - good things happen TO ME!"

Now, the only key thing you have to remember with this trick in order for it to work is this: Whatever the treat is that you are using, your can NEVER present it at any other time. It has to be associated exclusively with other dogs, otherwise it won't have the desired effect, and your dog just may get into a vicious fight. Keep this special treat, special!

Ensuring Your Own Safety

Now, if your dog does get into a fight, it is CRUCIAL that you not get involved. Just like we humans when we get thrown into a rage, dogs, as well, do not listen to commands when in a fight and will lash out at anything that holds them back - even their owners. Stories abound of owners who have received vicious cuts on their hands, legs, and even necks from trying to break up a dog on dog fight. Instead of throwing yourself into the middle of the melee, try the tips below.

Breaking Up a Dog on Dog Fight

Here are some ways you can safely break up a dog fight, without suffering from serious injuries:

Remember that with dog on dog fights, the key is to put yourself in a position of safety, while doing everything you can to stop the dog's fighting in a reasonable, humane way to them.

When taking your dog for a walk, keep him on a short leash and check collar so that he can't get too close to an aggressive dog. As soon as your dog or the other dog starts growling, immediately say "No" and command your dog to "Sit" so you can maintain control over him. If you force your dog to think of something besides fighting, he will quickly forget the idea of combat and focus on more important things - namely, obeying his master