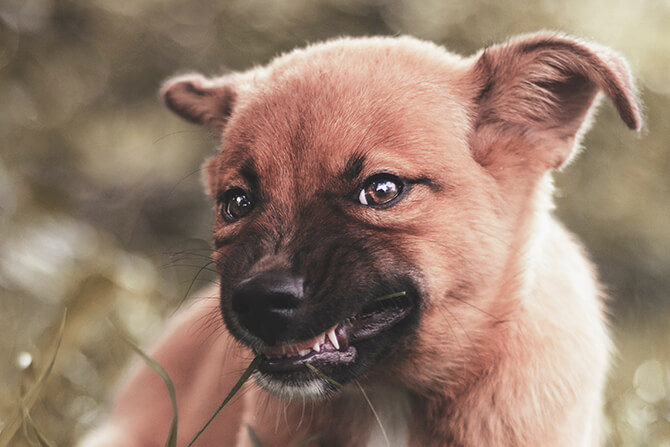 Puppies may seem cute and cuddly on the outside. However, that seemingly innocent puppy biting and chewing can mean serious danger to your yours friends, neighbors and visitors if they aren't dealth with at an early age. When it comes to aggressive puppy behavior, there are laws that state your dog can be put down if it bites someone.

To ensure that DOESN'T happen, you must train and socialize your puppy at an early age. Puppy aggression doesn't just mean puppy biting; it means barking and lunging at people as well. While the behavior may seem cute on the outside, if not properly treated at an early age, it can develop into serious dog aggression and will be much more difficult to fix at an older age.

Firstly, you should know the reason why puppy becomes aggressive. There are number of reasons for puppy aggression, including:

Finally, your puppy, if it is of a larger breed such as a German Shepherd or Doberman, may feel he needs to protect his territory and thus lashes out at strangers--or even family.

Whatever the reason, it takes a lot more than simple dog obedience training to handle a dog's aggressive problems. It would be wise to consider some serious puppy training.

Here are some solutions:

A pleasant behavior towards your dog and good socializing will drastically diminish aggression in puppies. Allow your pup to have fun and be young, but be firm and consistent in your training. Your puppy, family, and friends will all thank you!