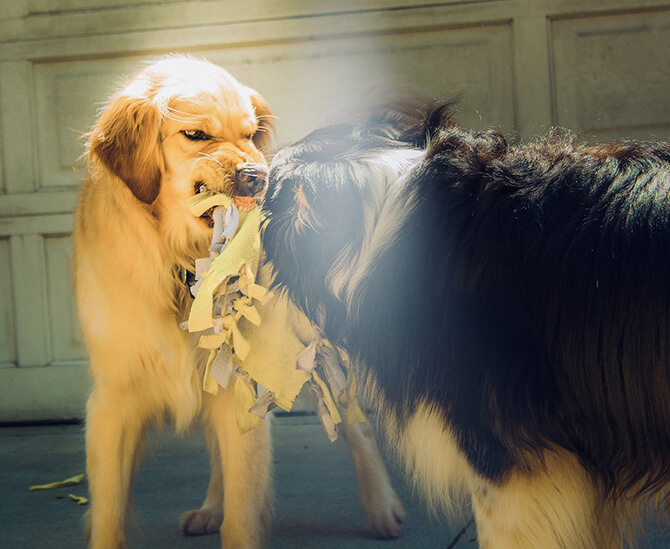 When dealing with aggressive behavior in a dog, it helps if the owner can pinpoint what the cause of the aggressive behavior is in order to deal with it most effectively. You may wish to consider getting professional help - you can speak to your vet about a referral to a canine behavioral modification specialist.

Aggression is viewed completely differently by humans and dogs. To a dog, aggression isn't 'bad' or 'good', or even 'aggressive' in the sense that humans understand; it's merely a necessary reaction to a situation. But since dogs and humans use different communication systems, misunderstandings are likely to occur between the two species. For example, upon meeting a new dog, a common human reaction is to run straight up, make lots of loud enthusiastic noise ("OOOOOOOOH aren't you CUTE!") and attempt to pet them, often on the head. To humans, greeting a dog like this is second nature; but if a dog acted this way towards another dog, especially upon meeting for the first time, it would be counted as a deliberate show of aggression.

The responsibility lies with humans to understand how dogs communicate, and how to train and condition your dog so that he understands that aggressive behavior is unnecessary and not to be tolerated.

Listed below are some of the more common causes for aggressive behavior in dogs:

Dealing with aggression isn't particularly difficult, provided you know exactly what you're doing. This is very important: inexperienced or ignorant people who attempt to correct aggressive behavior are effectively playing with a loaded gun. It's important that you do your homework on dog psychology and communication, and preventing and treating problem behaviors like aggression Click here for Aggressive Dog Training Guide.

It bears repeating that you MUST KNOW WHAT YOU'RE DOING if you want to treat aggressive behavior yourself. You neet to be able to figure out why he's behaving that way, and take quick efficient steps to treat it. It is no good trying to correct the behavior by shouting and telling him off if he acts in a certain way; different types of aggression require different approaches. Often aggressive behavior is merely a symptom of a deeper problem that your dog has which will also need to be diagnosed and treated accordingly.