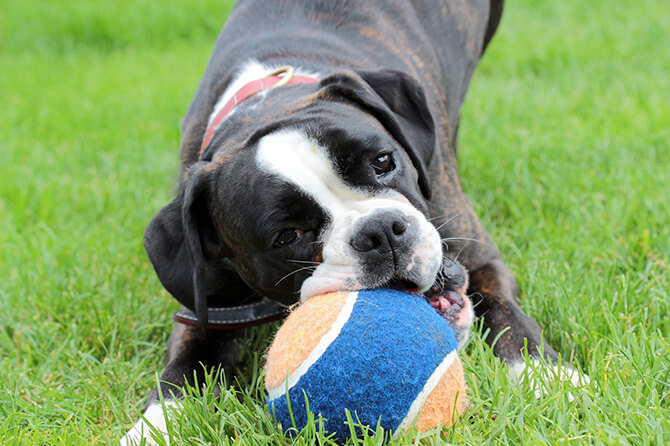 Reasons Why Your Dog Bites

Dog bites are a serious concern. It is estimated by the Center For Disease Control in Atlanta, Georgia that there are approximately 4.7 million people per year that are bitten by dogs in the United States alone. The greatest majority of the victims of dog bites are children, and since children are physically much weaker and smaller than many dogs, these bites can be serious, even fatal.

Understanding the reasons why dogs bite, is the first step in stopping dog biting. Dogs may bite out of:

Any one of these factors can cause your dog's biting, and even the calmest dog may react with aggression or biting behaviors in a stressful situation. Knowing how to handle each situation is crucial.

Dogs, like humans, respond to fearful situations by either fighting or running. If your dog feels threatened or helpless, he may very well resort to biting. While this annoys humans, it is just part of dog's ancient survival instincts. If he feels cornered, he is going to react by attacking back.

Dogs may also interpret situations differently than humans. For example, an arm raised to throw a ball may be seen by the dog to be a threatening or attacking motion, and the dog may bite out of self-protection. Pay attention to your body language; if you are moving your arms and hands around a lot, your dog will naturally see this as threatening. Be gentle and slow, not menacing and quick.

Be careful of play situations with children. Children have a way of innocently threatening small animals, and dogs are no exception. A dog may not understand that a child's gestures are playful, not threatening. Additionally, children often do not understand when a dog is running around in play, and when he is running away because he is afraid of the play activity. If a dog feels threatened but a child continues with his mischievous behavior, then the dog sees there is no option but to increase the aggression and bite to stop the child from threatening him.

How do you stop this behavior? First, make it clear to your children what is and isn't acceptable in playing with dogs. If your child continues his threatening behavior, separate him from the dog. If your child plays more peacefully but your dog still growls and bites, then it is your responsibility to reprimand the dog. A muzzle may be necessary; at the very least separate your dog from the child and ignore him until he has learned from his aggressive behavior.

You can learn a lot about how to stop your puppy or dog from biting in watching a group of puppies at play. They will play with one another until one goes to far or bites to hard. The victim puppy then lets out a loud "yelp!" to show that the other pup's she has calmed down.

Thus, follow the dog's behavior; get on their same level. If your dog bites, yelp when contact has been made. Then ignore him for several minutes. Ignore his whines and do not acknowledge him until he has calmed down and reacts to your "sit" or "stay" commands.

On top of biting out of fear, dogs also bite out of pain. Similar to fear-based biting, pain-based biting occurs when a dog doesn't know what is going on and reacts aggressively. If your dog gets injured, his normal gentle manner will go out the window, and be replaced with out-of-control behavior. Dogs don't understand that you're trying to help them; they will only see touching or approaching as worsening the agony.

The surest way to stop pain biting is to muzzle your dog. You never know how your dog will react to an injury or illness, so the safest way to avoid biting is to use a muzzle.

Different from biting due to fear or for self-protection, biting to show aggression or dominance often occurs when a dog wants to show dominance. This will occur if the dog does not understand that the owner is the alpha leader. Breeds that have a tendency to be dominant, such as German Shepherds or Beagles, are particularly prone to this behavior. As Beagles show, dominant dogs aren't necessarily the big, tall dogs.

Dogs that do not have the opportunity to socialize with other dogs, animals and people will become fearful or aggressive in new situations. Either one of these responses of fear or aggression can lead to biting behavior. It is important to start socializing your dog as soon as possible and in as many different environments as possible to help your dog feel comfortable and confident. As he gains respect for other dogs and people, his tendency to lash out and bite will be reduced.