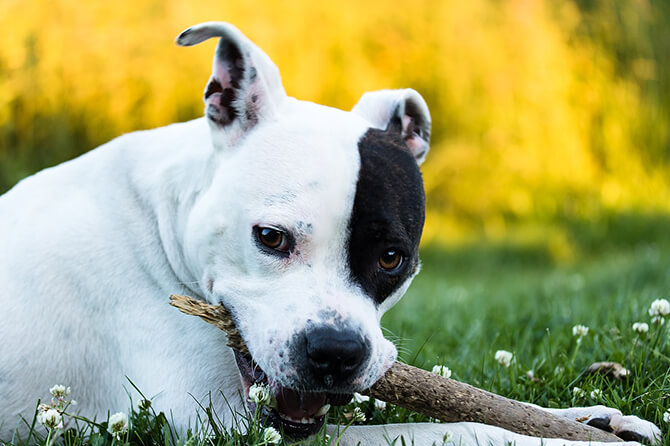 Dog attacks are a serious issue, and the media often sensationalizes such tragedies by blaming the breed - "Alsatian Bites 5-Year-Old, Neighborhood Calls for Breed Ban" etc. What is often forgotten is that no breed of dog is 'naturally aggressive', or 'an instinctive killer', or any of the other bloodthirsty and dramatic phrases assigned to certain breeds by the media and ignorant people. All dogs learn all non-instinctive behavior from his owner - including problem behaviors like aggression. If the dog receives the proper messages and training from his owner, he won't become aggressive in the first place. Even a dog that seems 'set in his ways' is almost definitely able to be rehabilitated, given the correct training and positive influences.

Let's look at a case study of an aggressive, dominant dog for further clarification.

Zac was a rescue dog, adopted from a shelter at 3 years old by his new owner, Janet. Janet wasn't sure what Zac's background was, but seeing as how he came from a rescue shelter, she imagined that he'd probably been abandoned and must be at least a little bit traumatized by his change in situation. However, she was prepared to love him no matter what. Janet's husband, Steve, had made it perfectly clear that he wasn't really interested in having a dog; that Janet could have one, but he, Steve, wasn't going to take part in training and caring for it. Essentially, Janet was the dog's sole owner. There were also two sons present intermittently in the house - they'd come home for holidays from school.

Janet took a very soft-hearted and empathetic approach to the care of Zac from the outset: she imagined that he had had a terribly traumatic past. Because of this, she unwittingly allowed Zac to assume a dominant role in the family: she would tell newcomers to the house to ignore him if he growled, and not to go anywhere near him until he seemed OK with it.

Just like a spoiled kid, Zac was calm and quiet only when nobody was challenging him or witholding something that he wanted. Once, when Martin - the youngest son - came home for the holidays, he approached Zac to pet him, thinking that, since he'd met Zac on many occasions before, Zac would remember him and welcome him back. Instead, Zac snapped and lunged at Martin's outstretched hand. This incident destroyed what little faith Martin had in Zac's ability to get on with people, and managed to convince Janet to stop living in denial and to take action with regard to Zac's behavior.

The major issue here is that Janet wasn't showing Zac proper leadership. She thought she was doing the right thing by attempting to 'soothe' Zac whenever he showed aggression or dominant behavior - she reasoned that he mustn't be feeling very secure, that he's had a difficult life, and no doubt his previous owners were to blame. What she should have been doing was correcting Zac every time he acted in this way - made it clear, consistently and firmly, that such behavior was not acceptable regardless of his past or current temperament. She wasn't being a proper leader.

Essentially, as far as Zac was concerned, there was a 'leadership vaccum' in Janet's house. Nobody was laying down any rules or limitations for him to abide by; every time he'd test the boundaries, Janet would react by either petting him and attempting to 'calm him down', or by simply allowing the behavior to occur without reaction. Both of these ways of dealing with an aggressive dog are dangerously incorrect.

By acting this way, Janet was allowing Zac to be the alpha dog. Zac was the one who decided who could and could not enter the house; Zac was the one who'd decide who could come near him and when. Janet did not make her expectations clear to Zac in terms of his behavior, and as a result, Zac - of course - ran amok.

Steve also shirked his duty towards his family and his dog. Even though Steve wasn't particularly keen on having a dog, by allowing one into his house he was in fact accepting a certain amount of responsibility: to ensure that that dog grew up to be safe around his family and other people, for a start. Steve would never discipline Zac for misbehavior, and as a result, Zac became increasingly aggressive and anxious.

This isn't to say that Janet let Zac away with absolutely EVERYTHING. Sometimes, when he was behaving particularly aggressively, Janet would remember to reprimand Zac for his behavior; but this never seemed to have any effect, and she could never figure out why. The answer is that intermittent leadership is just as confusing to a dog as no leadership at all - possibly even more so. Because Janet would sometimes allow certain behaviors and sometimes not allow them, depending on who he acted up to and whether or not she was paying attention or remembered to rebuke him, Zac became very tense and agitated - he couldn't predict when he'd be expected to act in a certain way, which resulted in a lot of anxiety and pent-up frustration. Of course, this made things even worse.

In order for Zac to understand everybody's expectations of him, Janet and Steve needed to be consistent. It's ineffective to only correct certain behaviors when you feel like it; a dog owner has to be truly vigilant and correct inappropriate behavior EVERY TIME it happens.

Regardless of how Zac may have been treated by his previous owners, he would have been a lot happier in his new home if Janet and Steve had made it clear to him that, first, he was not the pack leader, and second, that they expected him to behave in a certain way - which they should have demonstrated through consistent corrections of bad behavior, and rewarding of good behavior.

Zac didn't want to 'rule' the house, but all dogs need strong leadership - it's in their genes - and without it, they'll step forward and attempt to provide that leadership themselves.

Both Janet and Steve solved this problem by learning Alpha Dog techniques and applying them. With persistence and consistence, Zac's behavior started to change for the better. It became clear to him what his role in the household was; with defined boundaries and limitations for his behavior, he knew exactly what to do in order to be praised and rewarded, and he knew which behaviors were undesirable and would get him into trouble. This enabled Zac to relax a lot more, because he knew where his place in the pack was and what his responsibilities were. He was never particularly happy about strangers entering the house, but he no longer jumped all over them and barked hysterically; with a firm command from Janet or Steve, he'd behave himself and remain calm.