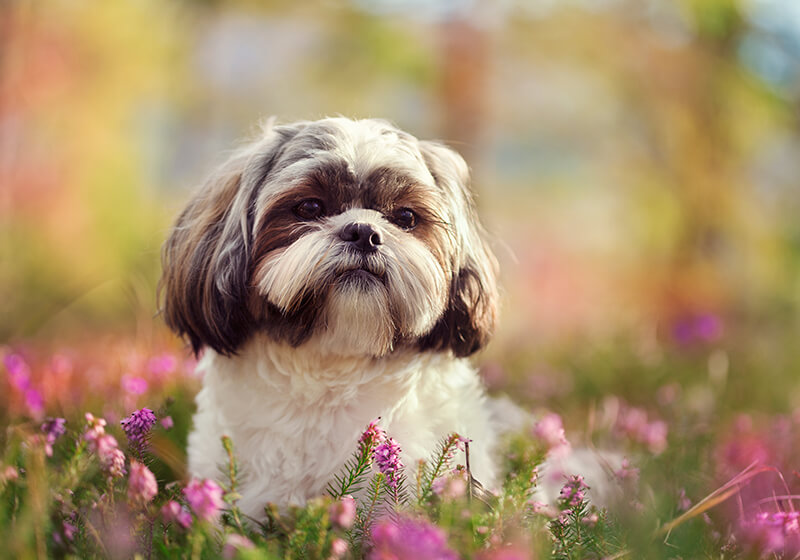 Shih Tzu are an intelligent dog which takes reasonably well to training. The typical nature of the Shih Tzu is friendly, playful, and animated. Not overly 'yappy' dogs, most are very alert and will sound the alarm readily, making them reliable watchdogs. Although small, they seem to have no concept of their own size - most Shih Tzu owners describe them as "huge dogs packed into a small body". Some Shih Tzu are so overconfident that they'll take on much larger dogs without a second though. Overindulged Shih Tzu can be snappy and arrogant; it's important that you don't spoil your Shih Tzu, as they tend to take this as a sign that you're a weak leader and will try to enforce their rules on you, rather than the other way around!

It's important that you don't dole out treats too readily - Shih Tzu need to earn their treats. Too many treats will not only have an adverse effect on your dog's health, but will teach him that you're a soft touch who's lower down on the pack hierarchy than he is. Your Shi Tzu will respond to you better and be much more content and relaxed if he knows that he can rely on you to act like a leader at all times - this prevents him from having to step up to the mark, instead.

Being the alpha dog is a heavy burden to bear. When dogs lived in the wild in packs, the alpha dog was the one who would make all the decisions. If the pack came under attack - for example, by another predator - the alpha was the one who'd have to act first and all the other dogs would take their cues from the alpha. If your Shih Tzu isn't sure who's the boss in the house, he'll get pretty stressed out because he's not sure whether HE's meant to be making all the decisions, or whether he should be following you. Not knowing where they stand is a difficult situation for a dog to be in.

Your dog will be much happier and more relaxed if he doesn't feel that he is the alpha, and thus have to dictate terms.

An alpha dog would NEVER reward another dog for no good reason. Alpha dogs simply expect good behavior at all times. This is why you shouldn't reward your Shih Tzu for no apparent reason; he must earn his rewards. Before he gets a treat, he has to do something for you: for example, before letting him go outside, make him sit and wait for you to go through the door first (another example of good alpha behavior).

Treats are a great way of forming new, positive behaviors. For example, using them as rewards during training works especially well on the Shih Tzu, who always appreciates food rewards. Instead of giving him a particular food that is a treat, why not get him to learn something new (like going inside his crate on your command) first, before giving him the treat. That way he gets the treat, as well as learning a new positive behavior, AND has a positive association with performing that behavior.

Your response to behavior from your dog has a huge impact on whether or not that behavior is repeated. If you treat your dog when he behaves in a certain way, this is how he learns that you approve of such behavior. To most dogs, your approval is what they really crave; food treats are just a way of demonstrating that you like that behavior. Later when the treat, such as food, is not used any more, the dog has already learned that such behavior gets him your approval - although sporadic food rewards do well to keep obedience foremost in his mind!

When trained properly, Shi Tzu make loyal and intensely companionable family pets. It's not difficult to train a Shih Tzu; you merely need to be consistent, patient, and firm.

If you want to learn more step by step Shi Tzu Training information, including beginners' to advanced obedience and tricks, as well as how to resolve a wide variety of common Shi Tzu problem behaviors such as digging, chewing, barking, whining, aggression, separation anxiety, house training and so forth, then visit DogObedienceAdvice.com/SitStay