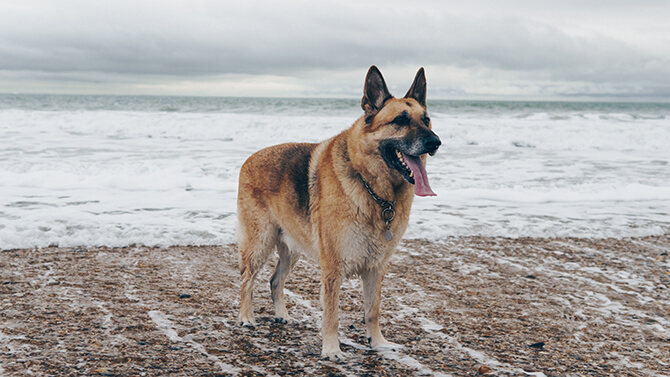 German Shepherds are strong, athletic dogs whose intelligence has ensured them a perennial role as police dogs, service dogs, therapy dogs, drug- and bomb-detection dogs, and military dogs. They also make excellent pets, provided that their owners know what they're doing and are experienced with powerful breeds like the German Shepherd. Sadly, a lot of owners get a German Shepherd without having taken the trouble to research the breed and find out what they're getting themselves into first, which results in a lot of sad, mixed-up, abandoned, and often aggressive German Shepherds.

Please note that aggression is NOT a 'typical characteristic' of ANY breed, including German Shepherds. It is a result of bad training and a lack of socialization. There is no such thing as a bad dog, just a bad owner.

German Shepherds are not Golden Retrievers. They are intelligent, athletic, strong-minded and independent dogs requiring firm, knowledgeable training to ensure that they grow up to be well-mannered and well-behaved.

This article deals with ways of preventing and handling aggressive behavior in your German Shepherd.

Here is a short list of some of the more common manifestations of aggression the German Shepherd breed.

There are some situations in which aggression is more likely to surface. These include:

Make sure you train your Shepherd from an early age. Older Shepherds can still be successfully trained, but it takes more time and effort to first 'untrain' them of any undesirable habits already acquired.

It is your responsibility as the owner to make sure your dog is getting what he needs. This means exercise, leadership, training, and affection. Your Shepherd needs ALL of these things to be a healthy, balanced dog.

For regular tips and advice on raising your dog, sign up to our free newsletter, just down the page - it's packed with valuable information on dog training and handling, and you can unsubscribe at any time simply by clicking on the link.

Note: There is even more comprehensive advice on how to train your German Shepherd located at DogObedienceAdvice.com/SitStay