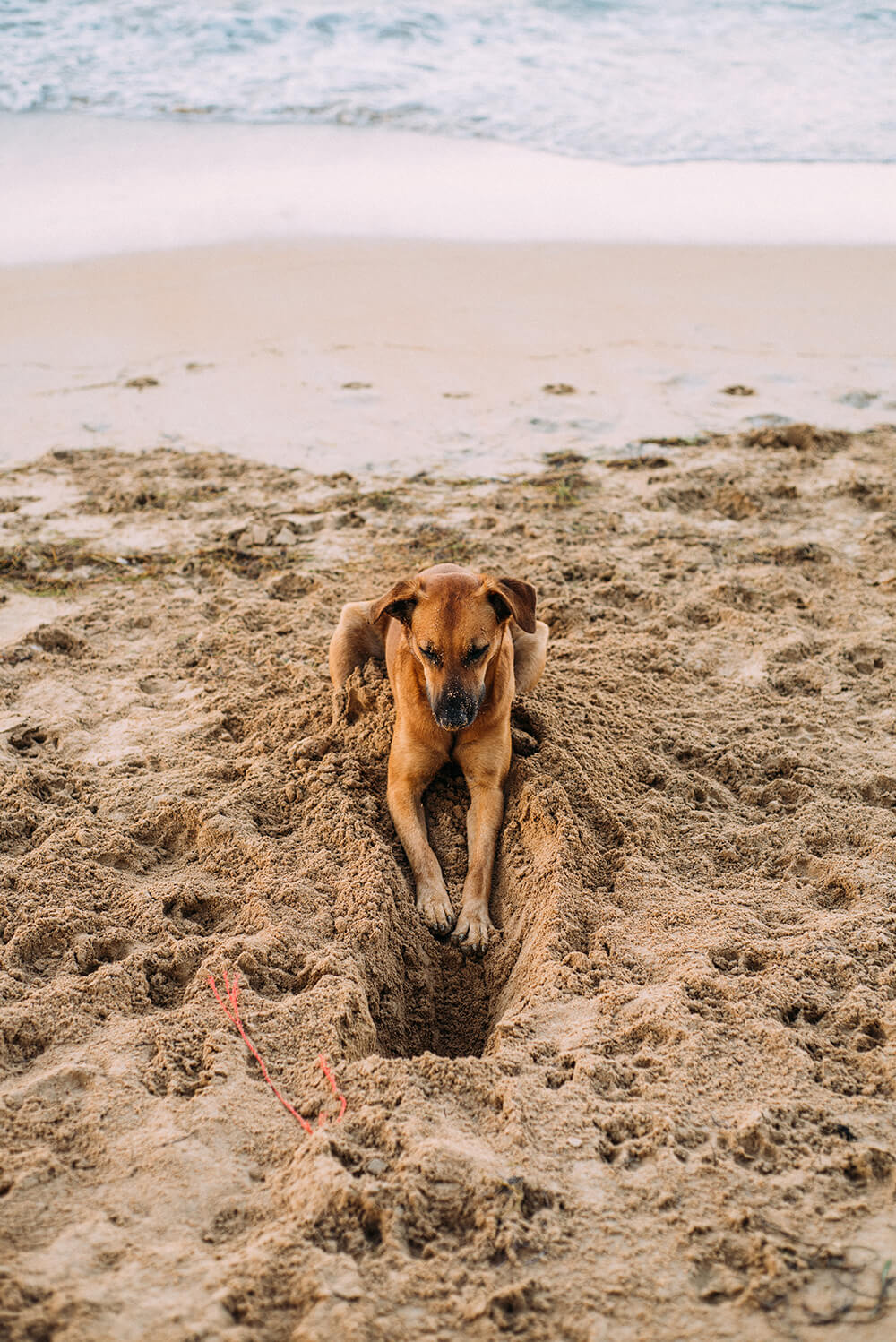 Stop Your Dog From Digging

Why do dogs dig? Do they all dig? Can it be prevented? Can you teach them not to? This article deals with the common reasons that dogs dig, and supplies effective solutions to both prevent and deal with the issue.

What breed is your dog?. Smart breeds (for example, Border Collies, Yorkshire terriers, Basenjis), dogs bred for killing vermin (dachshunds, terriers), gun dogs (retrievers) and some hounds tend to dig more than other dogs, although all dogs will dig if they're bored enough. If you have one of these breeds, there are some strategies that you can use to help prevent or eliminate the problem.

Some breeds are genetically hardwired to dig. If you're considering adopting a Staffy or Cairn, make sure you're aware of the potential havoc that these dogs can wreak in the space of a single afternoon! This isn't to say that they will definitely dig - plenty of 'digging' breeds are perfectly content to keep all four paws out of the dirt. However, it still pays to consider all possibilities.

One possible solution is to choose certain areas of the yard for your dog to disarrange as he sees fit. You could invest in a large, deep sandbox, and fill it with earth or sand. You can even plant grass on the top to really make your dog happy (for some reason, many dogs prefer to attack lush green grass rather than raw dirt). It won't take long before he understands that the sandbox/corner of the yard/patch under the tree etc is where he can dig, and nowhere else. Initially, keep a close eye on him: when he starts to dig in an inappropriate area, swoop down on him with a "NO!". Immediately redirect him towards the designated area, and praise him as soon as he starts to dig.

A mistake many dog owners unfortunately make is to rebuke a dog well after he or she has committed the 'crime'. If you yell at your dog or attempt to punish him after digging, then you will only confuse and frustrate the dog. Dogs do not have the sense of time that we humans have, so make sure that if you reprimand him, it's right in the middle of the act! In order for a correction to make any kind of sense to your dog, you have to catch him in the act.

In the Warmer Months

Dogs learn quickly that digging exposes cool, moist dirt that will help keep them at a comfortable temperature. In summer, some dogs will dig beds in the earth for reasons of comfort. All dogs need access to plenty of shade and cool water (if you have a flat-faced dog like a pug or a Bulldog, this is literally a matter of life and death for your pet, as brachycephalic (pug-nosed) dogs can't self-regulate their body temperature). Make sure your dog has a place to go when outside that is shady and cool - if you're lacking in trees, erect an awning, or shade his kennel by stretching sheets or canvas over it (much like the fly of a tent). Ensure he has a supply of fresh, cold water at all times. Another option is to give him a shallow pool to splash about in (water dogs like Retrievers, spaniels and poodles will especially enjoy this; if you have a Bulldog or Boston Terrier, steer away from pools: these dogs are physically unable to swim). A small children's paddling pool will do the trick - your dog is cool, happy, entertained, and has no reason to dig any more.

Dogs have always concealed treasured food and bones underground - this habit traces back to their days in the wolf-pack, where food would be buried for later consumption.

Today, dogs no longer need to hunt for their food, but the instinct to bury leftovers remains a basic instinct in many. It's a difficult habit to break, as it is completely natural to dogs, so instead of fighting it, meet your dog's motivation. Provide him with his own digging area full of buried treasures--toys, and certain food treats (just be sure to avoid giving him ones you don't want to spoil and stink up the yard!). If your dog ever digs in an off-limits area, correct him WHILE HE IS DIGGING - not afterwards - and take him straight to the digging-accepted area. It may help to pick up his bone or food item yourself and make scratching motions in the dirt until he picks up the idea. As soon as he starts to dig in the appropriate area, praise him instantly and exaggeratedly.

Of course, we all know that your dog is going to find ways to get to certain areas of the yard while we're away or not looking. To prevent your dog digging in your prized garden or other areas, try some of these tactics:

If your dog spends large amounts of time alone - for example, if you work outside home - and has little to occupy his time, it's almost guaranteed that he will turn his attention to 'irritating' habits like barking and digging. This is not his fault; those long lonely hours can really stretch out, especially for companionship-oriented animals like dogs, and he NEEDS something to stimulate his mind and body. There are several ways to counteract the effects of boredom:

Additionally, make sure you're stimulating your dog's mind. Try to provide at least 10 minutes of training daily; dogs actually enjoy the challenge of learning and mastering different commands. Sparing time for that, leave your dog with plenty of toys and puzzle games. There are lots of toys available at pet stores that challenge your dog's mind; one in particular I recommend is the Kong toy or Buster cube. This toy is made of stout plastic with a cavity inside that is filled with small amounts of food, such as cheese or peanut butter. Dogs can literally spend hours trying to get the food out of the hole. And more importantly, they won't spend their time digging!

If you don't have extra money to spend on designated dog toys, simple chew toys should get the job done. Balls are terrific as the dog can push and toss them around and will self-exercise throughout the day - although NOT tennis balls, as the furry outer coating is easily ripped off and can cause intestinal blockages or choking. Choose a ball that's too big to fit into the dog's mouth, and that is made of hard, non-puncture plastic or rubber.

If your dog can't access the yard, he can't dig. Simple as that. If all else fails, and you REALLY don't want your dog to dig, you can restrict his access to the garden unless he's actively being supervised. This is a pretty harsh method, and it won't be much fun for the dog (or for you, really - the primary reason most dogs dig is an excess of energy and not enough stimulation, so if you take that outlet away, he's REALLy going to be wired); but it does work. To compensate for his new, restricted life, you'll need to take him outside and play with him lots of times during the day - at least four or five, for at least five to ten minutes on average - and also allow him some supervised time just to sniff around without being engaged in active play.

stop your dog from digging