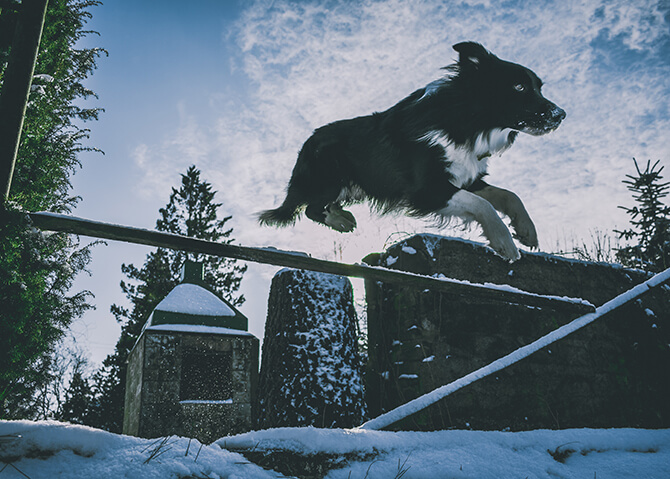 Mike has a 1-year-old Labrador Retriever called Rocky. Like a lot of Labs, the dog is very friendly, and becomes excited whenever anyone in the family arrives home. Rocky demonstrated her excitement by leaping up and jumping on people. As Rocky grows bigger, this jumping becomes more and more of a problem; she's even knocked a few people down. Mike has tried a variety of methods to deter the behavior, but with limited success; Rocky still jumps up, and shows no signs of stopping.

Some Basic Facts About Jumping

Rocky only jumps up when people first enter the house or yard - it appears to be a greeting mechanism. Mike and his family feel that if they make a point of greeting Rocky as soon as they get home, he'll be calmer when he greets them than if they left him outside for awhile before greeting him. Despite this belief, it seems that nothing is going to stop Rocky from jumping up on people when he greets them; the family isn't sure why, but thinks it's probably just because Rocky is happy to see them. As it turns out, this isn't entirely the case.

Three Reasons Why Dogs Jump Up On You

She's overexcited. Dogs don't jump on people just because they're happy to see them; they jump because they're overexcited and need to expend this energy in some way. Overexcitement in a dog is not a natural state for her to be in, and is caused in Rocky's case by the fact that she wasn't receiving enough exercise, which made her tense and agitated with a lot of excess energy; and also, she was all alone during the day, which meant that she was bored and understimulated.

Jumping to assert dominance. When dogs greet each other, they stand quietly while the other one sniffs them. They do not leap and jump all over each other; this would be considered very bad manners in the dog world. When Rocky leaps all over her family, it's not just because she's happy to see them; she's actually asserting her dominance. No subordinate dog would EVER jump on the alpha dog, as this would be grounds for a sharp correction. When you accept your dog leaping on you without correcting her immediately, you're confirming her dominance over you.

Jumping because such behavior is rewarded with attention. When Rocky leaps up on her family, they reacted either by trying to calm herby petting and stroking her, or by jumping back, trying to push her off, flailing their arms around and making a lot of noise. To a dog, both of these reactions are a direct reward for such behavior: in the first case, Mike's family tried to calm Rocky down by petting her. This didn't calm Rocky down, it merely proved to her that leaping up will get her some nice attention. In the second case, Rocky didn't know they were trying to push her off; she thought they were playing a game, and so became even more excited.

Any attention paid to your dog when she's behaving in such a way is seen as reinforcement of her behavior. What Rocky's owners should have done was to turn their backs and walk away, ignoring Rocky, the instant she began to jump. After a short while, she would have stopped her behavior in puzzlement, which is when they should praise her and reward her with pats and affection.

Stopping A Dog From Jumping

How Mike Dealt With Rocky

In Rocky's case, the best thing to do was to ignore her for a short period of time. She needed to learn that everyone's attention isn't focused on her; that she's not the alpha dog. When they arrived home, nobody would make eye contact with Rocky until she was calm and deserving of an affection reward - i.e. calm and not acting excited and hyperactive.

This manner of only doling out affection (a reward) when your dog has earned it through obeying a command or behaving appropriately shows that you're the alpha leader, and you're in control. This is behavior and communication that your dog understands.

If Rocky did jump up at any of them, the family would either turn their backs and ignore her completely for a short while (five minutes or so) until she'd calmed down; or they would correct the behavior actively. For example, some members of the family would spray her with a water pistol (kept by the door) when she started to jump up; as soon as all four feet were on the floor again they would praise and reward Rocky.

It's important to remember that rewarding good behavior is just as important as correcting bad behavior. There is no point in correcting Rocky for jumping, either by ignoring her or actively correcting her, unless she gets praised and rewarded for behavior that the family would like to see repeated.

Through being persistent and consistent, Rocky learned that jumping up on people wasn't acceptable behavior. The trick is to make sure that all members of the family, as well as guests and friends, know how to react in this situation: by correcting bad behavior, and rewarding good behavior.

For more information on preventing and dealing with problem behaviors like jumping, as well as all the common problem behaviors that dogs exhibit, check out Secrets to Dog Training. It's a complete manual for dog owners, written by an experienced professional dog trainer - it's available for immediate download here.