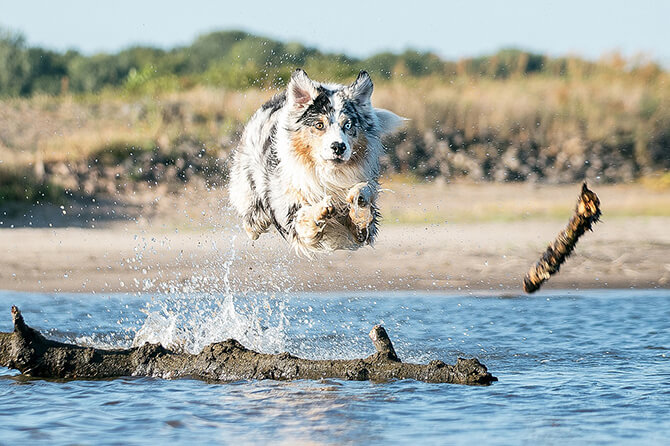 Jumping up on people is pretty common behavior for most dogs. The usual reaction from owners is to think the dog is just happy to see them (which is usually part of the reason); however, it's also a classic demonstration of dog-over-owner dominance. Have you ever seen two dogs greeting each other? Well-behaved dogs don't leap all over each other; they stand still and permit the other dog to sniff them over. If this behavior is acceptable for dogs, you certainly shouldn't permit anything less for yourself!

For the most part, dogs jump when they want attention and when they are happy to see you. Unfortunately, the usual reaction of a person reacting to a jumping dog is to either petting the animal in a misguided attempt to calm it down, or by first pushing the animal down and then petting it. Both of these responses have little to no effect upon the dog; the first one directly rewards jumping by petting and showing affection when the dog does it; the second reaction rewards the behavior by 'playing' with the dog (she'll think that you pushing her away is just engaging in play). Neither of these reactions does anything towards stopping the behavior.

Size isn't important when it comes to a jumping dog (although it's a lot scarier to be leapt up on by a large dog than a small one - this may be why so many small dogs get away with murder!). Even if your dog is tiny and can't actually hurt you by leaping up on you, she's still acting out her dominance over you; and you don't want that, do you?

Jumping is a widespread behavior with all dogs. Regardless of size it's still annoying, destructive, and potentially dangerous behavior. Remember, not everyone is a dog lover; you can't expect everyone who visits your home to react to the leaping behavior of your dog with untrammelled delight.

Training Your Dog Not to Jump

Most people deal with a jumping dog by attempting to calm him: this generally translates to petting the dog in a way that actually reinforces the dog's behavior - such as petting him while he's still jumping about. Instead of wasting your time with methods like this, try using the following techniques:

OFF In More Detail

Teaching your dog the OFF command is an effective way to stop jumping, and is also a good way to keep your dog off couches, beds, counters, and so on. This is a word every dog should understand. It will not only prevent jumping, but keep dogs off your couches, counters, and doors. Here are two tried-and-true methods:

1. Whenever you're expecting guests, put a leash on your dog and let it dangle behind her. When people arrive and she jumps up to greet them, step quickly on the leash. Her forward momentum will pull on her collar, and she shouldn't be able to get up very far anyway. Essentially, she's correcting herself. When she stops jumping, reward her with praise and a small food treat.

2. Put a leash on your dog and hold the free end. When she jumps up to greet someone, firmly tell her, "Off!" Pull the leash firmly to one side. Timing is essential here - you must pull the leash as you say OFF. Pulling the leash sideways will force your dog to put here feet back on the ground. As soon as all four paws are on the floor, praise her.

Something to remember for both methods: Get your guests involved. A lot of people who profess themselves to be 'dog-lovers' actually don't have the faintest idea about how to raise a well-behaved dog; a surprising number of people are quite happy to be jumped on (especially those who don't have dogs at home!). It's important that you ask them not to tolerate your dog jumping up on them. Explain that you're trying to teach your dog NOT to jump up on people, and their cooperation is actually necessary. Explain to them the importance of paying no attention to your dog when she's jumping around, and involve them in rewarding your dog with treats and praise once she's calm (this will also assist in making sure your dog NEVER jumps up on people, not just when you're present).