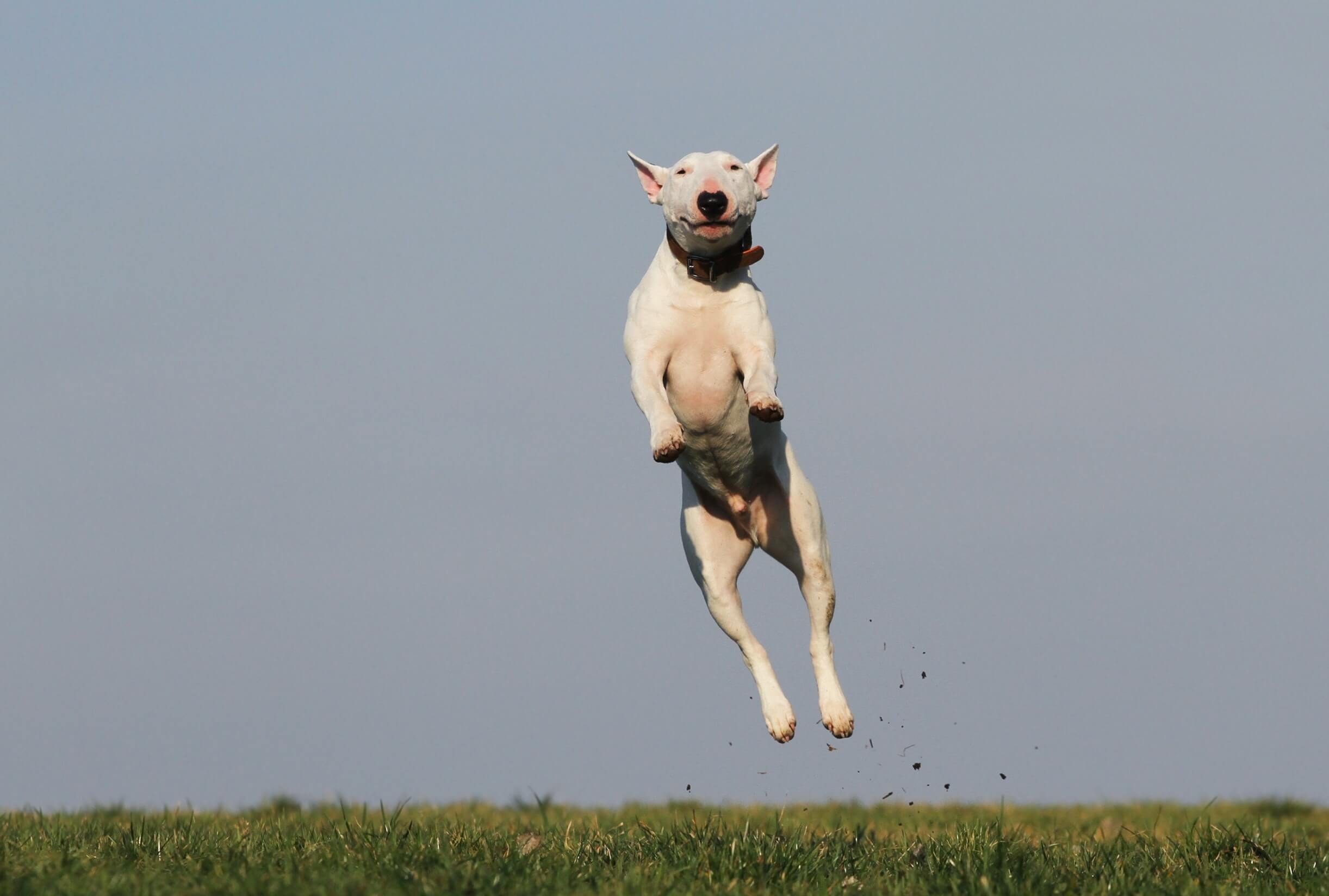 It can be a shocking, even frightful, situation: Your dog jumps on a family member, a visitor, even you. And when you want it to go down, it just won't. What's a dog owner to do?

Fortunately, it's not too difficult to stop your dog from jumping. With the proper amount of consistent training and know-how, any dog owner can teach his dog to get off people, and stop jumping.

Here are some things you should know:

There are three main reasons why dogs jump:

1. To assert dominance. Whether it's jumping on people or jumping on furniture, both instances illustrate a dog that wants to raise his station in life. By jumping on you or jumping on the couch, he's saying that he's the pack leader--something that you DON'T want to happen, as a dominant dog is much more difficult to train (and can become quite aggressive). In either case, you'll definitely want to institute the proper alpha dog training techniques, if you haven't already.

2. To greet people. Dogs identify each other by smelling scent glands around each other's faces. As humans are much taller than dogs, there's nowhere to go but up!

3. Because they have been rewarded for this behavior in the past, whether purposely or unknowingly. Some owners may, at one point or another, allowed the dog to jump on them or on their furniture, welcoming their dog's enthusiasm to see them. Other owners inadvertently reward their dogs jumping, simply by doing something good--such as walking or feeding the dog--right after the dog has jumped. Even if they told off the dog for jumping, by providing the dog with a walk or with food, they make the dog connect these positive actions, with a not-so-positive action: jumping! The dog sees thing in a very simple, linear fashion: if he jumps, he'll get to go for a walk--or even better, he'll get fed!

Top 5 Techniques To Stop Your Dog From Jumping

1. Do not let your dog make a big deal out of your arrival home. In fact, as the alpha leader of your family's "pack", you shouldn't even greet him or her for at least 15 minutes. If your dog jumps around and pesters you before that, squirt him with water pistol or shake a can filled with pebbles. This will startle him, and if done on a regular basis, calm him whenever you get home. He won't make such a big deal of your arrival, and thus learn that he can greet you without jumping. Follow the same technique for any visitors to your home. Do not introduce the dog to your visitors until after 15 minutes or longer.

2. Greet your dog on his level! In addition to waiting to greet your dog, you should also greet him in a stooped position, so that he doesn't have to jump up to greet you. Additionally, if you wish to pet or cuddle your dog, do so on his level. This removes the need to jump at any time. PRAISE HIM for not jumping. If he jumps, use the "Off" command until he stops.

3. Avoid rough play with your dog. This means no tug of war or wrestling games. These types of activities only encourage your dog to jump, and make him think it is perfectly acceptable ALL the time. It will also lead to aggressive behavior such as biting and unprompted attacks, so make sure to avoid overzealous play!

4. Use the "Sit" command. This is one of the most basic, and important, commands. As such, if your dog is well trained, he will respond to the Sit command before even thinking to jump. If he does not respond well to the Sit command, then more training is necessary, as this is the foundation for dog obedience training. Train him until he responds to it in everyday situations, such as greeting and going for walks. The better he understands the Sit command, the much less likely he is to ever jump at all.

Teaching Your Dog the "Off" Command

Ideally, this command should be taught immediately from the time your dog is a pup just brought from home. If not taught early, it will be MUCH more difficult to teach your dog, later.

1. When the puppy or older dog jumps (whether on a person or furniture), immediately say OFF.

2. Make an open-mouthed snarl without noise, but with your teeth quite visible. This way, you're talking a dog's language, one he will surely understand! This is a natural signal used by adult dogs to their puppies to calm down. Ensure you make direct eye contact.

3. Repeat this command several times, until your dog doesnt need to be told twice. Praise immediately when he stops himself from jumping.

Make sure other family members and visitors understand this command, as well. It is crucial that your dog understand that all family and visitors are above his rank in the pack. Otherwise, he will lash out and try to assert himself on everyone. While using the Off command may not be appreciated by most visitors, but it is more important that a dog has a good greeting manner with all people. A little effort on everyone's side makes your dog disciplined and docile.